2019 tournament summary: "heavy wind and rain warning" leads to first-ever cancellation of an AISA event.
Congratulations to Coach Hill and the YIS Dragons!
Rain, rain (and wind) go away; come again some other day. Had it come only one day later, we would have been treated to some top-quality volleyball (and then maybe stuck in Osaka another night). As it was, on day 1 the volleyball was indeed high quality; we were unlucky not to be able to see more of it.
With the threat of a school activities-cancelling boufuu keihou severe storm warning imminent, we created a shortened match schedule for Saturday with the intention of crowning a champion. We didn't even get the chance to start the matches as the warning came at 4:23 AM; thus, all matches were called off and the tournament was over. Disappointed is an understatement.
Based on pool play records and set differential, we placed teams 1st through 6th. With an undefeated 2-0 record and a set differential of 6 after sweeping both pool play matches, the Yokohama International School Dragons were crowned 2019 AISA girls volleyball champions. While the tourney did not end the way we all wanted, the Dragons showed strong ability and poise on day 1 and are deserved champions.
Fair play award winner: ISB Bears
As often happens at AISA events, 2 or 3 or 4 teams received votes for the Fair Play award, indicating that the level of sportsmanship was high among all players and coaches.
The Senri and Osaka International Schools (SOIS) community welcomes all teams, coaches, and fans to Osaka, Japan,
​for the annual AISA girls volleyball tournament, October 11-12, 2019.

Congratulations to the host school Sabers as they win the 2017 AISA boys volleyball championship tournament with a 3-1 victory over the Phoenix of KIS. This is a repeat championship for the Sabers, and its 5th title in the past 6 years. Congratulations, Coach Mitsuhashi and Coach Majima. SIS finished in third place, and BISF won the sportsmanship award. Click on the results button below for all scores.
Sportsmanship award winner: Busan International Foreign School Bears 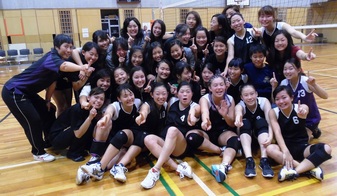 ​Congratulations to players and coaches from all 6 participating teams.